Case study: Development and application of innovative crowdfunding and donation tools inside a video player that can be embedded anywhere

A complete and flexible fundraising toolset

As producer of marketing and distribution at the Scottish Documentary Institute and together with their technology partner Distrify, Ben successfully applied for Nesta funding for the development of a fundraising toolkit that

Pre-existing crowdfunding intermediaries did not offer this functionality, were expensive and labour-intensive (for example, rewards needed to be handled manually). Their static widgets were designed to draw users to a portal and didn't invite instant interaction at the point of contact.

The Portable Fundraiser toolset was launched in several stages coinciding with the global release of the documentaries I AM BREATHING and FUTURE MY LOVE, preceded by extensive outreach work.

The five use cases are:

Before and after a film, supporters are invited to top up their purchase with a sliding-scale charitable donation to a related cause, acknowledging that issue-driven documentaries often leave people deeply moved and motivated to help.

2. Pay what you want

Supporters set their own price for a film, essentially by topping up a set minimum, with the sliding scale explains what the chosen amount enables.

Supporters crowd-fund a new film project and receive instant digital rewards for their contribution, such as downloads of previous films.

Supporters organise their own community screenings, with the sliding scale explaining how pricing depends on event type and audience size, enabling access to a downloadable high-resolution protected video file suitable for projection.

More about this in the second video on our I AM BREATHING page.

Supporters ‘pay forward’ for other people to watch the film, and once these people have seen it, they are asked to ‘return the favour’ by paying for yet others to see it.

More about pay-it-forward in the FUTURE MY LOVE case study.

Each of these use cases can be combined with an overall fundraising target, as was successfully trialled with The D-Word's recent fundraiser. 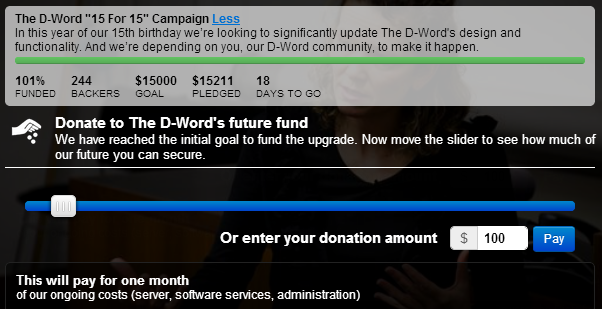