I was a PMD

In 2011, I became one of the world's first 'producers of marketing and distribution', possibly the first full-time one (working across several feature docs produced or distributed by the Scottish Documentary Institute), and certainly the first PMD in Scotland. My role kept generating additional income, so the original 16-month contract lasted a whole 38 months. My focus was on new tools and strategies, and the biggest campaigns were around I Am Breathing and Future My Love.

I continuously found myself explaining what a PMD is, no matter whether I was talking to members of the public or film industry. I had only been in my new job for a couple of days when influential producer Ted Hope blogged he was "not truly a fan of the term," though he then went on to share lists of PMDs and their tasks, obviously underlining the importance of this work. 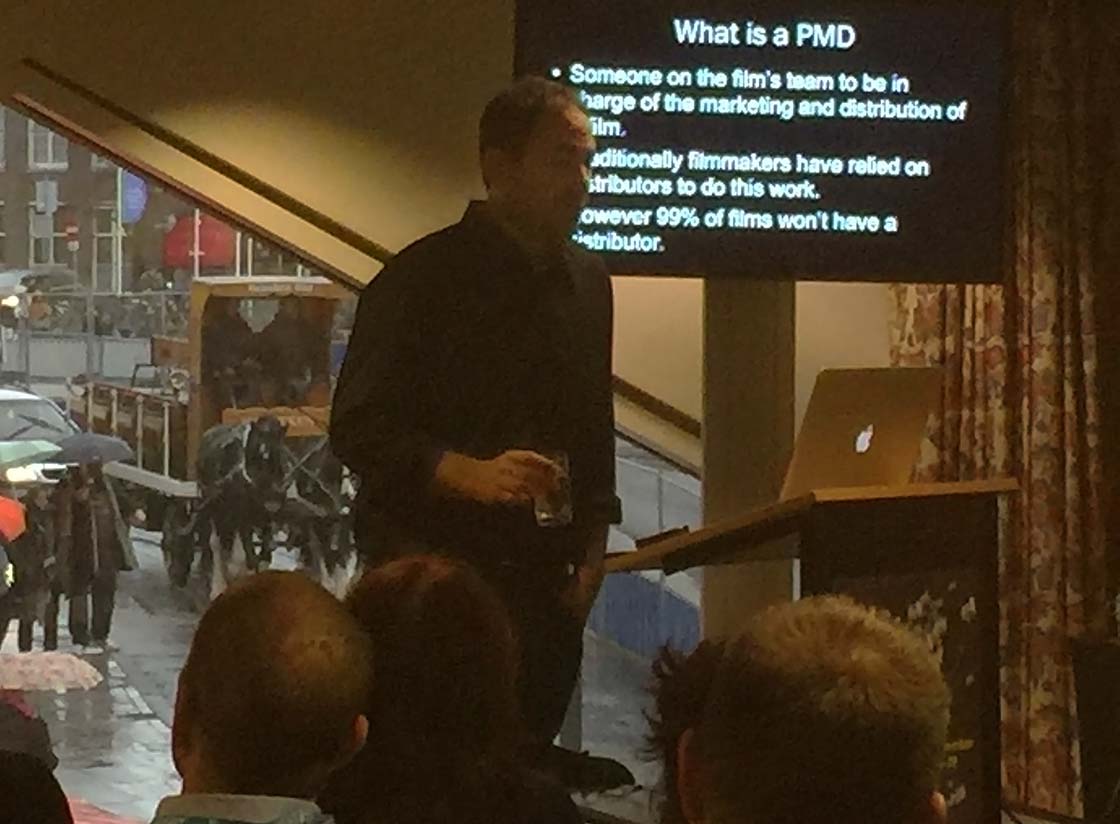 It got a bit quieter around the PMD in the following years, and unlike the related 'impact producer', the name hasn't really caught on yet. But recently at IDFA and now at Make Your Market, Jon Reiss is giving the concept a new push. I sat down with him in Amsterdam for a catch-up.

Ben: "I always felt that there were a whole lot of different expectations to that role from different sides. To some people I was the kind of new-technology guy, to other people I had to look over every marketing and distribution contract, to other people I was this sort of publicist or at least social-media publicist, and in the end I felt like I could never possibly do all these expectations justice. You originally defined the role of the PMD not necessarily as one single person that has to do it all."

Jon: "The original concept is that the PMD will be similar to a line producer or a director of photography where they wouldn't be doing everything on the film. On the projects I have worked as PMD on, I hired a marketing person who also handled the outreach and social media. I also hired a publicist on that film and I also hired bookers, and I supervised the process and to me it's like the best case scenario of this job... I think optimally a PMD could be supervising several films at the same time – just like outreach people can work on multiple films."

Ben: "You called it 'producer' for a reason."

Can the PMD be a 'trainee'?

The reality in the UK looks a bit different. Recently, there has been a trend to make the PMD a junior role. When an English production was looking for a 'trainee PMD' last year, I asked them who was going to provide the training. It turned out there wouldn't be any – it was just a way of advertising the same job with less pay.

Recently, my former employers have been recruiting two PMDs as part of the 'Make Your Market' scheme. Their list of qualifications and duties reads almost like the one for my job at the time, but this time pay is just above the living wage. Granted, there is the promise of a lot of mentoring through the scheme.

Ben: "Do you think there is a danger that the role, with your emphasis on making this a 'producer' title, gets watered down?"

Jon: "I think there's a danger there but I come out of the DIY world... I have to say there's plenty of directors out there who have never directed before and they're directing films and they are the directors."

For the junior PMD roles, Jon would actually prefer to see terms like those used by the Producers Guild, such as 'coordinator' or 'associate'. But there is no mention of the PMD on the Guild's website yet.

Jon: "They might be resistant but we're going to talk to the Producers Guild of America and see what they say. I'm sure there are producers' organisations in every country so it would be interesting to start having conversations with those."

In the meantime, Jon has big plans for a 'PMD Academy' in order to offer comprehensive, standardised training for the role.

"I think this has developed to the point that the need has exceeded the availability of people, the funding for people, and the training. We're just at one of these little crisis moments that hopefully propels the academy into existence... There's going to be a website component, online courses and in-person courses, that's the idea. And then hopefully there'll also be an agency to try to place PMDs and even impact producers in jobs, just like DPs, directors or writers have agencies."

With the recent rise of the 'impact producer', how would Jon position the PMD concept in comparison? Both Jon and I had attended Britdoc's first-ever Global Impact Producers Assembly in Amsterdam, where a good amount of time was spent discussing the terminology that describes the job. I made the point that, outside the film world and across all three sectors, this kind of position is simply called a 'campaign director' – no matter whether you look at advertising, politics or non-profits. Jon responded we couldn't call it a 'director' because that word is protected by the Directors Guild of America.

"I think that the impact producing world is so focused on impact that the notion is it's focused on working on social change. So I'm not so concerned about that. I'm less concerned about titles necessarily as opposed to the work being done so that films that don't otherwise connect with an audience as they should – and I include outreach, marketing and distribution in terms of that connection – are able to connect with an audience. That's my mission in a sense." 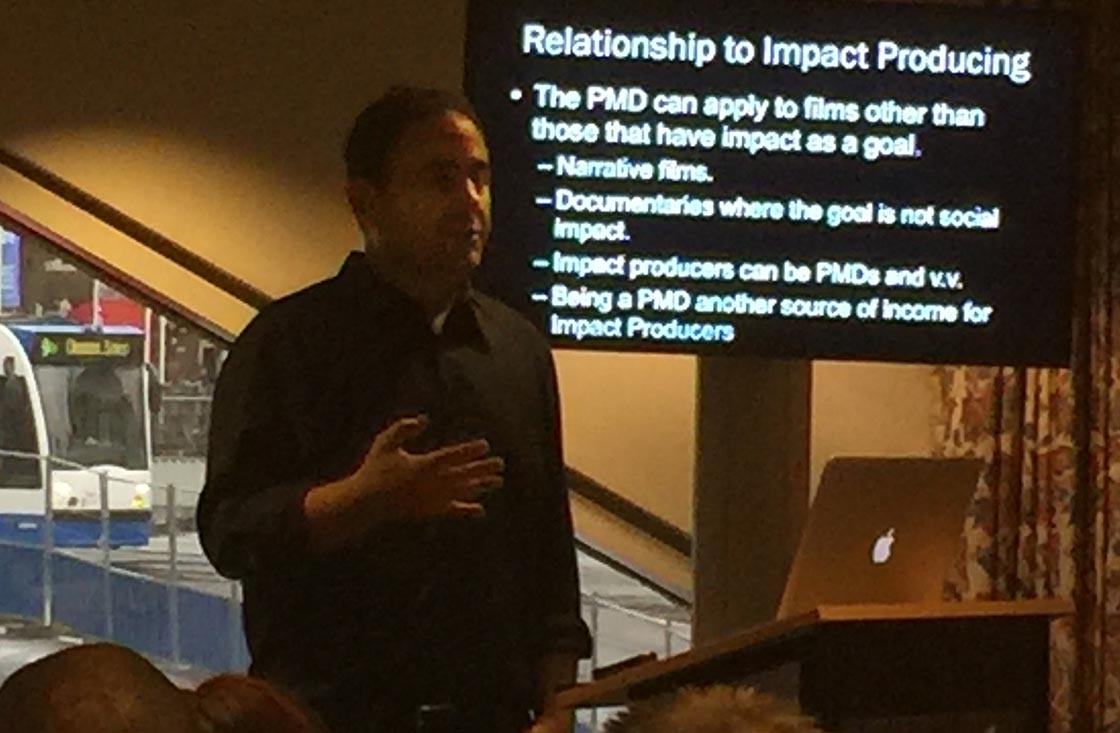 "I wrote a whole book before thinking of a producer of marketing and distribution. And my attitude was just like, "tough, you know I was a filmmaker and I did this by myself – all you filmmakers, too bad, you have to do this too!" And then I thought, wow, it's really actually so much work that there really should be more people involved and there should be someone who is knowledgable who can supervise that process and that's where I got the idea for the PMD."

"I don't really care about differences in territories. It's just whatever helps film-makers – and frankly all artists – sustain themselves and connect their work to an audience. That's essentially what I'm about."

I agree with Jon. The most important thing is that this kind of engagement, outreach, and impact work happens in the first place – whatever job titles you use to describe it.

For the time being, when people ask me what I do, I simply say: "I organise campaigns around films."

And I really look forward to being on a panel discussion with Jon Reiss, Jeanie Finlay and Jo Taylor on Saturday as part of the Make Your Market event in Edinburgh this week. Next month, there will also a panel at the Glasgow Film Festival with a focus around the PMD.