With 170 screenings planned for a single day and nearly 19,000 people signed up in advance, the launch of DIE KINDER DER UTOPIE (Children of Utopia) is set to make a big impact. From the earliest stages of the project, the ambition was always high for a film of this scale: our original intention was to secure special cinema events in the 80 biggest cities in Germany.

From the outset of our campaign, it became clear that the offer of a film that refreshed tired old debates about inclusive education was striking a chord with people. It also became apparent that traditional distribution practices in German cinema wouldn’t be able to meet this level of interest on time – unless we could prove to them in advance that the film already had a momentum of its own.

Why hadn’t cinema on demand taken root in Germany?

There are a whole host of reasons why some countries have taken to cinema-on-demand platforms, and others have yet to embrace it. On one level, it’s simply about the fact that many novel tech platforms emerge in North America and therefore tend to travel to English-speaking countries in the first instance.

Tugg and Gathr have been competing to become the dominant platform in the United States since 2012. Both were greeted as something really new and significant at the time. We first worked with a Gathr implementation on the US box office success Awake - The Life of Yogananda in early 2015 (incidentally using one of the first NationBuilder systems set up by Film & Campaign). 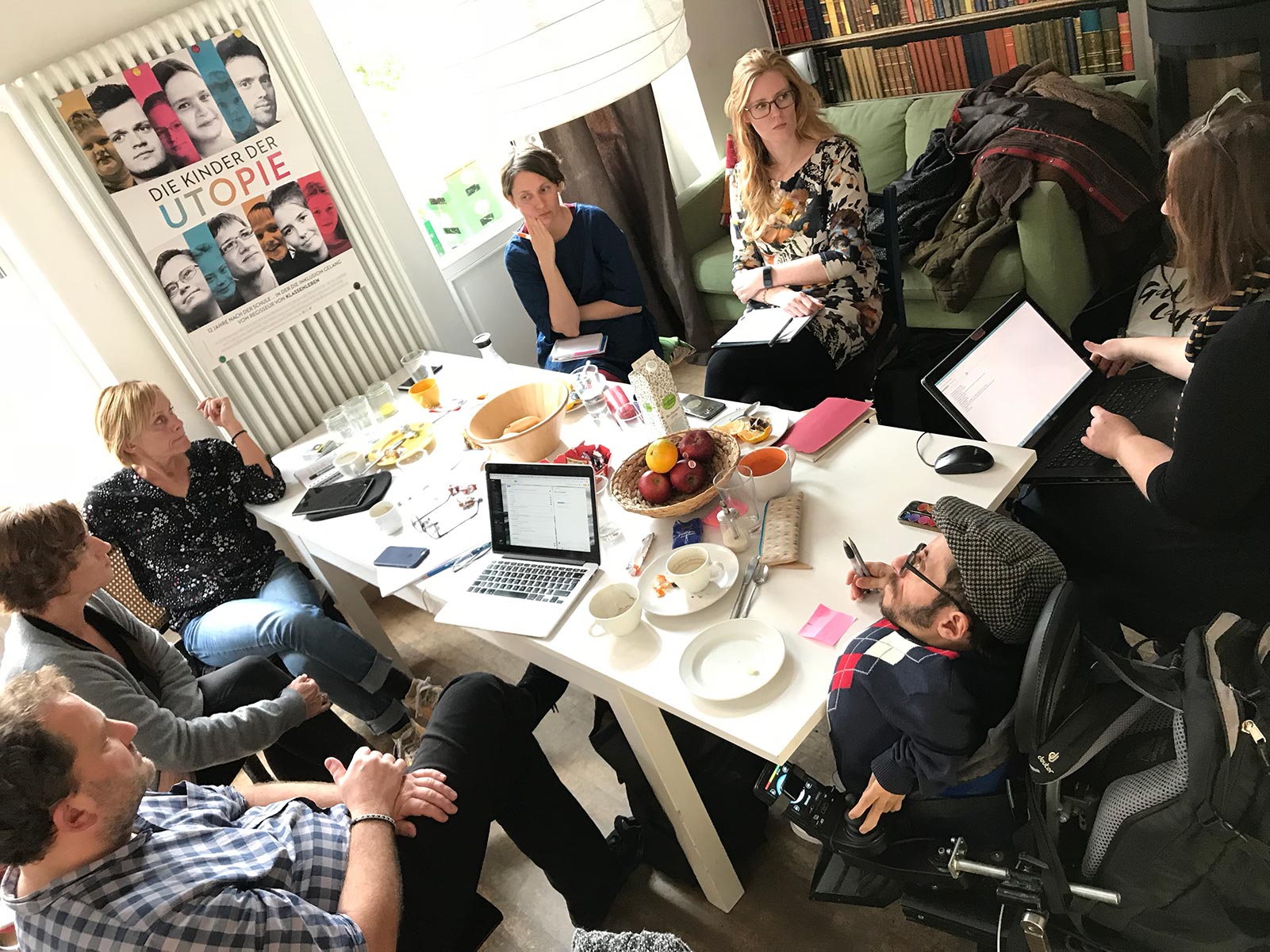 The team behind the campaign at a planning meeting half a year before the big day. Photo by Hubertus Siegert

Our Screen, launched in 2014, also made waves in the UK market: prominent BBC film critic Mark Kermode said that the platform has the potential to "blow cinema programming wide open." Our clients at the Scottish Documentary Institute trialled it with the release of Seven Songs For A Long Life.

Cinema on demand is an innovative way of turning the cinema market on its head, so it’s unsurprising that from the moment these platforms launched, their potential for taking impact documentaries to new audiences was recognised. In fact, one of the first big cinema-on-demand campaigns was a documentary by Richard E. Robbins, Girl Rising, which campaigned for the education of girls worldwide. A film with some striking similarities to Children of Utopia.

How to make the audience pull the film to their locality

Still, in certain countries, more rigid models of cinema distribution have clung on, despite new digital opportunities coming on stream – as Ben Kempas, chief strategist at Film & Campaign and originally from Germany, points out:

"In countries like Germany or France theatrical releases are very tightly regulated. There has been an accepted pathway for films to get seen by audiences that no one has seriously questioned– until now,’ he explains. "At the end of the day, there are quite powerful lobbies involved who are more interested in preserving the old ways rather than trying to innovate."

As the Hubertus Siegert's production of Children of Utopia didn’t involve public funding, the campaign was free to side-step some of the more restrictive regulations.

The documentary needed a decentralised distribution model, in which the audience effectively pulls the film into a cinema in their area.

But there was still an obvious problem. With no cinema-on-demand platform operating in the German market, how would a demand-driven launch of the film be coordinated? How could people who desperately wanted the film to come to their local cinema make this happen in the least complex way possible?

Without Tugg or Gathr – how do you do cinema on demand?

The answer was to make use of Film & Campaign’s existing expertise in deploying the community-building platform NationBuilder, which was well suited to providing the basic framework for the campaign.

This allowed us to offer RSVPs to audiences long before each provisional screening was confirmed. This created a snowball effect: every individual who wanted to attend had an obvious incentive to spread the word: to make the event happen in the first place. These RSVP numbers could then be passed on to a dedicated cinema booking agency, clearly demonstrating to each cinema the level of demand in their city. 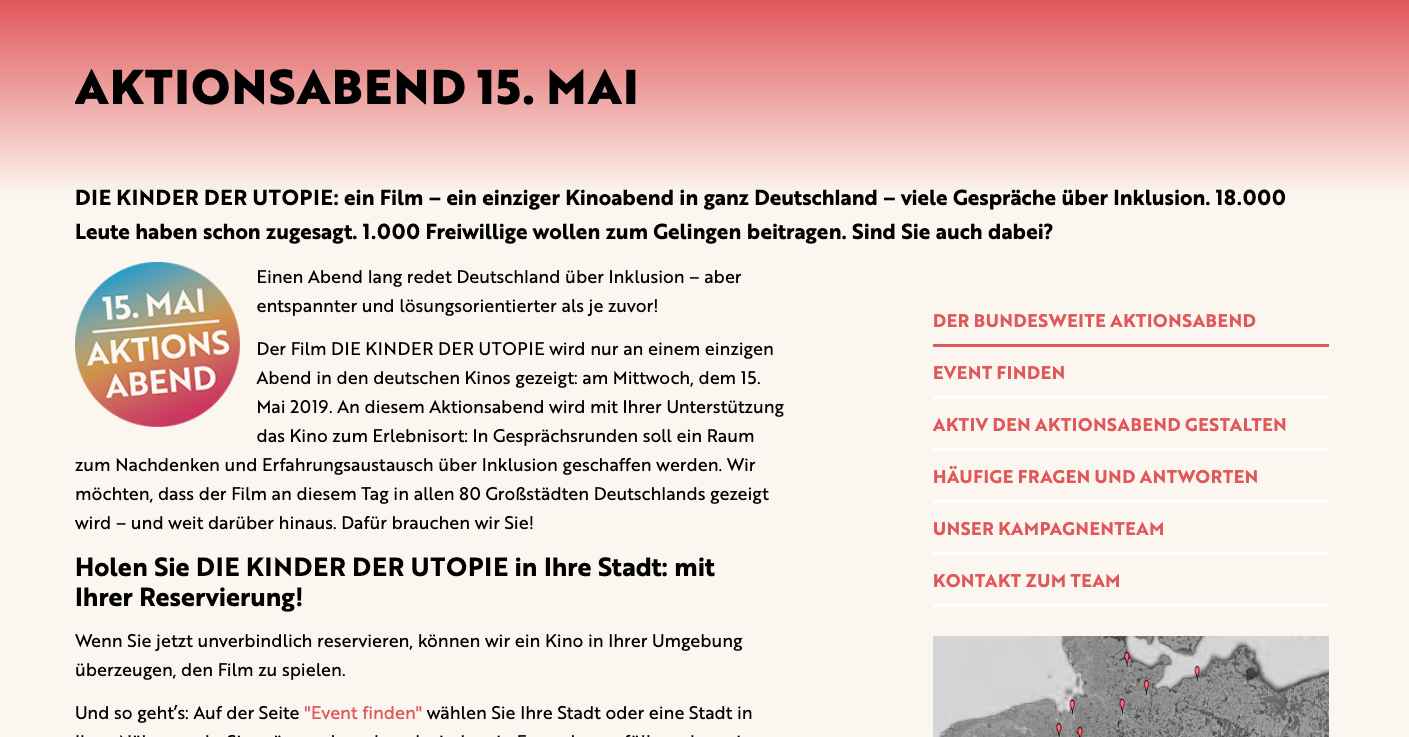 Screenshot during the build-up phase using RSVPs: Bring the film to your town!

The campaign relied upon an appetite amongst people to take ownership of the project at a local level: to volunteer and act as ambassadors for the film in their home town.

This is where the special qualities of Children of Utopia really came to the fore. As we discussed in Part One, there is a long-running debate in Germany around inclusive education. It’s a cause to which thousands of people have already committed something of themselves, and want to take up opportunities to keep the issue moving.

19,000 RSVPs, local ambassadors, and a single day of action

This kind of decentralised grassroots model stands in sharp contrast to the old centralised top-down nature of the film industry. The vast majority of the 170 screenings of Children of Utopia taking place this Wednesday has a single ‘patenschaft’  (literally ‘godparenthood’) by an individual or an organisation promoting the event and hosting a debate in a local cinema, on a voluntary basis.

"The recipe behind the ‘patenschaft’ is that you give them a sense of ownership, you get them behind the action. We rely so much on these volunteers. They’re not contractually obliged to deliver: it’s a matter of trust and empowerment and giving people a framework to work in," explains Ben.

On the film distribution front, the existence of all these strong local ambassadors also made cinemas take the risk and book the film. 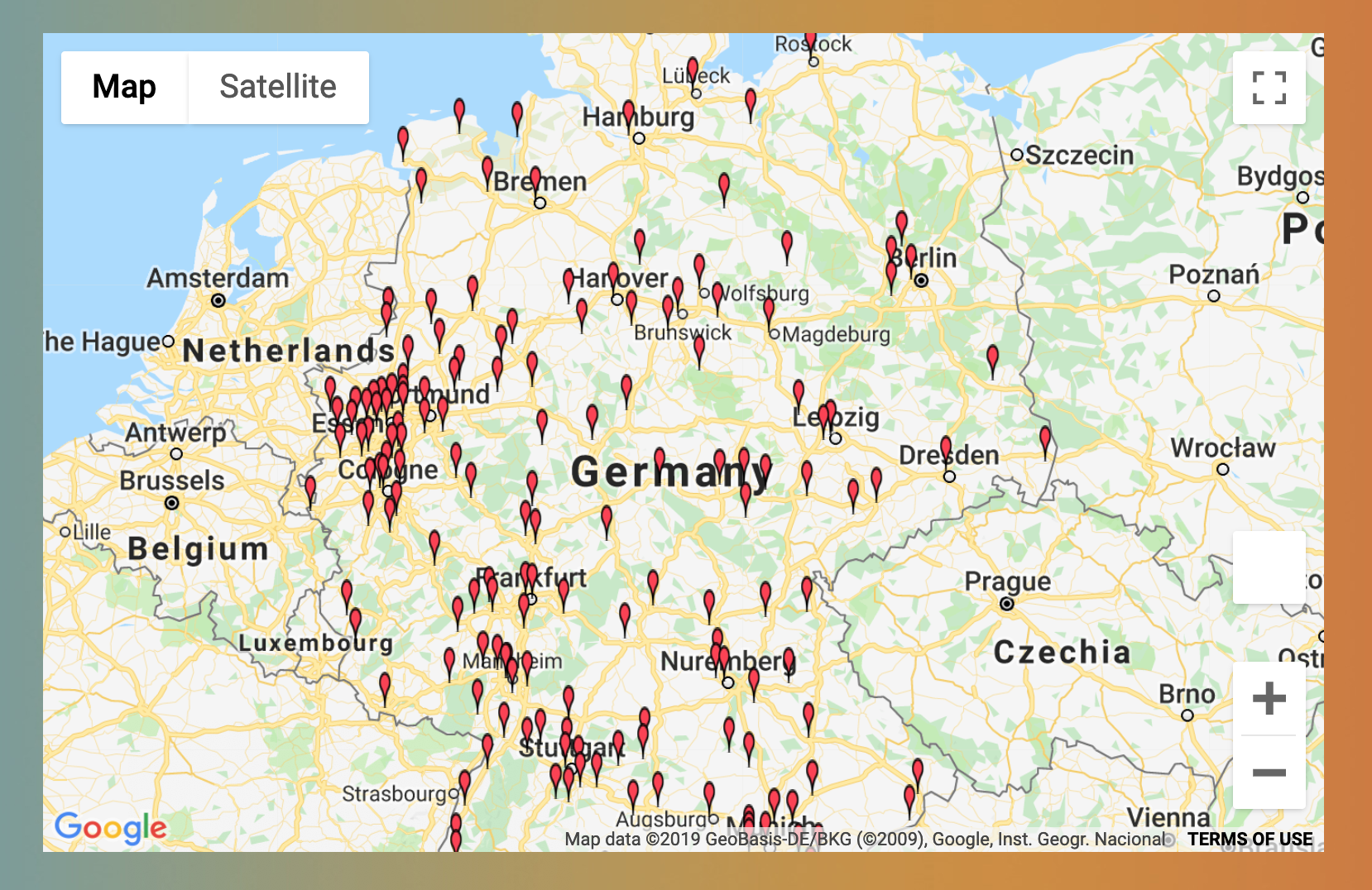 The map of planned screenings for Children of Utopia (live version at www.DieKinderDerUtopie.de)

In addition to all this activity taking place on the ground, Children of Utopia has also benefited from a very active online operation, with dedicated content producers (Susanne Bauer in Berlin and the Mittendrin team in Cologne) developing a whole strand of informative, shareable content, placing ‘Inclusion under the Microscope’. A range of articles, videos and memes offer a closer look at the why and the how of inclusion, whilst also addressing some of the challenges regularly cited as barriers by opponents.

Widening the debate with a story universe

This content has been produced by a team of journalists and writers on a regular basis over the course of six months and served two key purposes. Firstly, to show how the film and the campaign approach their subject in a qualitatively different way, secondly, to offer a whole ‘story universe’ as a way to let target audiences discover the big event and to keep them engaged in the long run.

For Ben, this reflects the best of the film itself:

"This is a big debate in Germany – and when Germans are debating something they tend to quickly adopt entrenched positions. This film enables a debate to break that habit, by focusing on what has worked and then trying to build on that.
I’ve learned that willpower is the one ingredient needed to make inclusion work: and in the first instance that means a willingness to open up the discussion."

The world premiere of the film happens tonight, 12 May 2019, at Munich DOK.Fest, with the debate being live-streamed on Facebook (get a reminder or tune in here), Periscope, YouTube and accessibility provider VerbaVoice; our big day of action across Germany follows this Wednesday, 15 May. The first cinemas are reporting sold-out screenings and adding additional events. The week after, we'll report here how it all went.