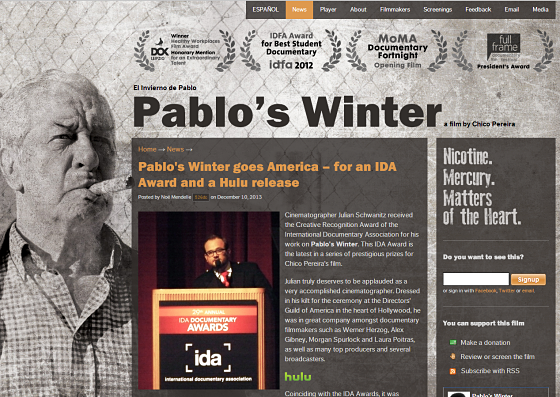 This is a good example how not every documentary film needs a huge campaign, but how a NationBuilder website can still be crucial for building and managing your audience, especially when it's one of many sites feeding into a single 'nation' for the production company.

The Pablo's Winter site was put together in just a few days based on Ben's favourite first-generation NationBuilder theme. Called Focus, this theme worked particularly well with large responsive backgrounds like this main still for the film (change the size of your broswer window and you'll see how the image adjusts).

The theme keeps in tune with the black-and-white look of the film, using only a single additional colour to highlight headlines, links, and buttons.

Functionality covers all the basics, including a blog for news; maps that automatically switch between upcoming and previous screenings; forms for feedback, emails or screening requests; and a compact yet efficient media page with downloadable files.

With screenings, it is noteworthy how the dedicated promotion of NationBuilder RSVP pages in combination with corresponding Facebook events always pulls far more people into the database than plain listings. Compare this screening in Edinburgh to other events that don't show such activity.

Unlike other sites Ben has built, this one is not completely bilingual. However, there is a dedicated Spanish page with a modified Distrify VOD player that operates entirely in Spanish language.