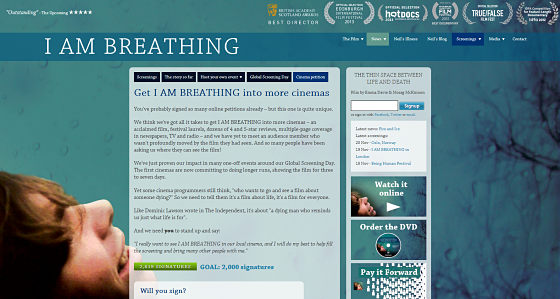 I AM BREATHING utilises almost every tool in the NationBuilder box:

Volunteer forms, donation pages, supporter recruitment and surveys are just some of the special page types used on this site.

Users are allowed to host their own community events and list them on the site. The FAQ section covers all the details.

The interactive map of resulting screenings must be one of the most impressive ones on the internet, with more than 350 screenings held in 50 countries.

This success led to a NationBuilder petition to show the film in more cinemas, exceeding its signature target twice and now signed more than 2,600 times, also adding many new supporter contacts to the database.

In addition to the film's news blog, Ben re-edited the protagonist's original 100 blog posts between his MND diagnosis and his death, adding previously unpublished images and comments by his widow to each post – one a day, over 100 days leading up to the global day. Note the links to previous and next posts on each page – essential for this type of reading but not a NationBuilder standard, Ben built them specifically for this site.

Another one of Ben's bespoke add-ons, every page automatically transmits the right information to generate Twitter Cards.

A custom page checks for available pay-it-forward vouchers to watch the film for free.

More about the campaign for this film