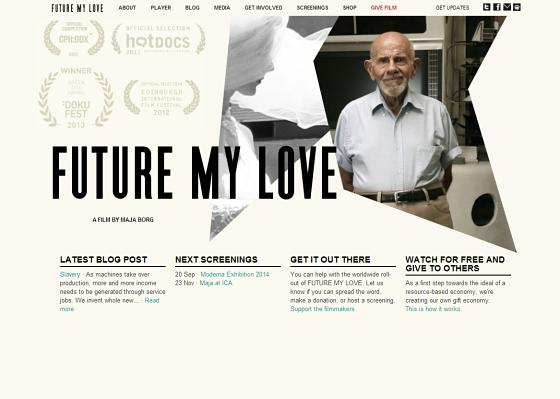 On FUTURE MY LOVE, a very clean layout features shard-shaped image fragments that also get animated while scrolling the home page.

This bespoke design was originally built in 2012 on a content management system called Joomla, using NationBuilder pages solely as iframes for signup and volunteer forms. It was assumed at the time that something like the Skrollr animation script couldn't be integrated with NationBuilder.

The Joomla setup became increasingly impractical as things like comments or event management couldn't be integrated with SDI's main NationBuilder system. The iframe signups also didn't work well with multiple-stage processes or email confirmations that link back to the site.

A year later, SDI finally decided to move the entire site to NationBuilder. Ben's job was to move the original content and look (including that Skrollr script and self-resizing headlines) and to replace many hard-coded elements with automated NationBuilder functionality.

Ben also added maps of upcoming and previous screenings and edited Maja Borg's provocative filmmaker blog to complement the news section. Later on, a simple shop for VOD rentals or DVD purchases was added, and pay-it-forward functionality was integrated. The Distrify API feeds all interaction with the film's video players straight into NationBuilder.