Another sad day for the people of Chagos

About two weeks ago, I found myself visiting a cemetery in Crawley, near Gatwick Airport. It was Chagos Day, which marks the 16th anniversary of a High Court victory by the Chagossians over the UK government.

Some 45 years ago, the natives of the Chagos Archipelago had been deported from their islands by the UK in order to establish its so-called British Indian Ocean Territory and to lease the island of Diego Garcia to the United States for use as a military base, now notorious for a few things.

In 2000, the High Court declared the islanders' forced removal illegal and ruled that the people of Chagos had a right to return. Ever since, successive UK governments have blocked any attempt to return.

In fact, yesterday, the Foreign and Commonwealth Office confirmed that Chagos islanders cannot return home. They say it's too expensive and/or not viable and/or against the military interest of the US – take your pick.

I may be getting into conspiracy theories now, but it is noticeable how such negative announcements are made at times when the public is distracted by major debates: the Supreme Court published its long-awaited but disappointing decision within a few days of Brexit; yesterday's announcement was hidden in the public outrage following Trump's victory. Be honest – did you hear of either?

As another distraction, the government's refusal to let Chagossians return to their islands came neatly packaged with a promise of £40 million to support the community in their English exile. Great, isn't it? Money is an important part in the old divide-and-conquer strategy I got to witness first-hand in the US government's dealings with Native American tribes: let the disadvantaged fight over how to use the funds, and over who gets how much, and it'll keep them busy long enough for the bigger picture to be forgotten. 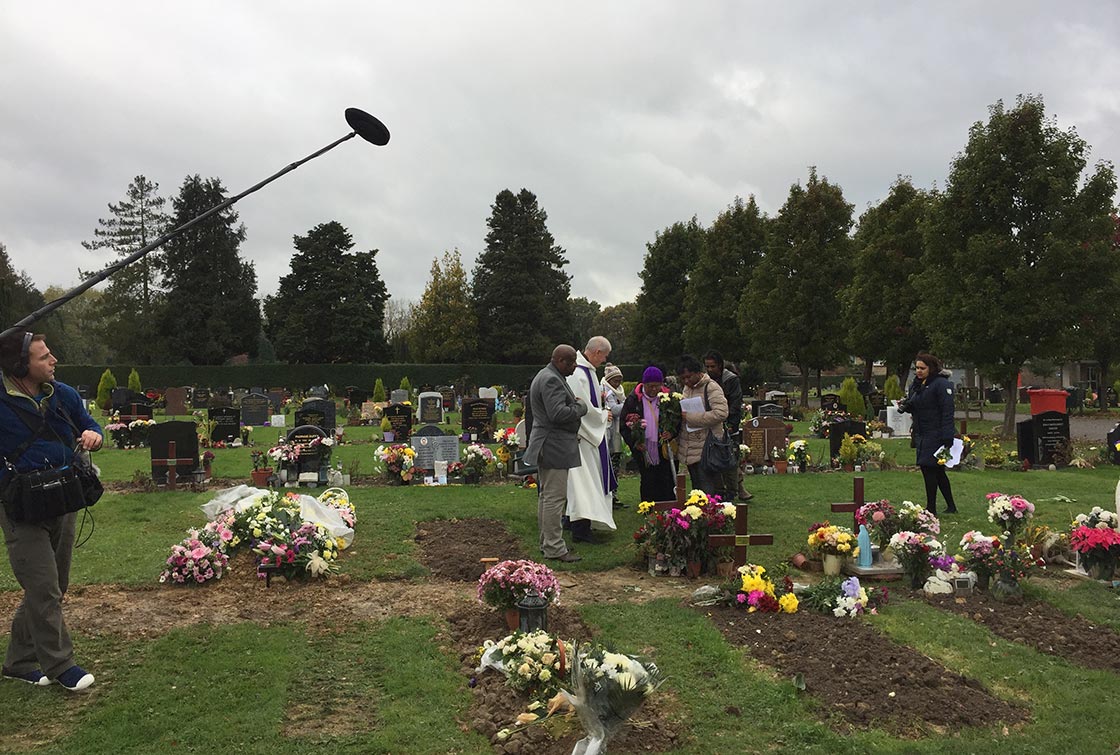 Back to the cemetery, earlier this month. Most of the native Chagossians, always longing to return to their islands, ended up in Crawley, right next to the airport that had brought them to the UK. They keep dying too early, in poverty, in a rather dire English exile. Their families can't afford the expensive funerals. A local priest is giving benediction to their graves. Everyone is in tears.

As I'm not from the UK originally, I hadn't come across about this outrageous story until Belgian producer Hanne Phlypo told me about it some time ago: For his ongoing documentary project Fields of Hope, director Olivier Magis has incredibly personal and exclusive access to the UK coordinator of the Chagos Refugee Group, Sabrina Jean. Sabrina is a total powerhouse, keeping her community together and helping everyone who needs support.

Hearing about this story, I instantly offered our support to Hanne, as I'm convinced of the need to try and raise UK funding in order to keep this long-term observational project going. So that's where we're at, working to get UK funders to understand the need for this film, and making big plans for an outreach campaign.

2016 has been such an important year for this story: the Supreme Court decision; a Chagos football team competing in the Conifa world cup of stateless peoples; and then the expiration and, as we know as of today, the extension of the military lease of Diego Garcia to the US. On all of these fronts, and in so many other tragic ways, 2016 has not been a year to remember fondly.

Yet Sabrina and fellow Chagossians are not giving up. Sabrina, who was born in exile on Mauritius, has promised her father he'd be able to go back to his island. Time is running out.