Scottish independence and the film industry

When I heard producer Iain Smith say that "separation" was a problem, I initially assumed that he, as chairman of the British Film Commission, was using the unionists' preferred term for Scottish independence. However, it soon became clear what he was really talking about: "The separation of culture and commerce has been debilitating for the British film industry" -- a struggle Iain has been witnessing since the early 1970s when he graduated from the London Film School.

I had come to this debate as part of Glasgow's Short Film Festival, trying find out about implications of a Yes or No vote in Scotland's upcoming referendum. Six film industry representatives were to discuss "what independence might mean for our film culture."

Instead, and perhaps unsurprisingly, the panelists spent the best part of 90 minutes moaning about the miserable status quo. Belle Doyle, who was in charge of promoting filming locations at Scottish Screen and Creative Scotland for many years, put it like this: "It breaks my heart that there is not anything we can look at to say that the film industry is thriving."

She pointed out how many other places were in a position to offer financial incentives to attract international productions in a highly competitive market. Professor Philip Schlesinger, a cultural policy researcher, reminded us that "we don't have a film policy yet," with the Scottish Government's 650-page white paper, Scotland's Future, only devoting one paragraph to the film industry and Creative Scotland's recently-published Film Sector Review "coming as close as it can to suggest a break-up of Creative Scotland." 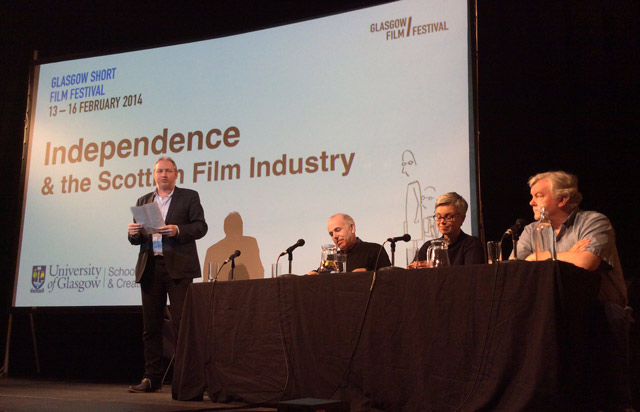 Setting up a large film studio in Scotland has long been seen as key to attracting international and British productions. Just two days after this panel in Glasgow, Pinewood announced they were going to build their new studios for film and 'high end TV' in Wales instead of Scotland -- estimated to bring some £90 million to local Welsh businesses alone. "We know Scottish Enterprise personnel have been meeting Pinewood executives for the last year to discuss possible business opportunities in Scotland, but obviously no-one could make a decision," Belle Doyle was subsequently quoted in The Herald on Wednesday. "We feel the industry in Scotland has been dealt another blow."

Edwina Hart, Welsh Enterprise Minister, also announced an investment of "up to £30 million into projects brought forward by Pinewood and aimed at increasing film and TV production in Wales." Though not specified any further, this amount would almost be as much as the much-admired Danish Film Institute's annual budget to support production. In comparison, Creative Scotland's entire Film and Television funding programme has an allocation of £4 million for the year 2013/14. (There are many other lessons to be learned from film policy in Denmark, a country with a population the size of Scotland's.)

Back to the discussion in Glasgow. "The studio idea is a Trojan Horse," according to Iain Smith. "Other things will happen because of it." He said Scottish Enterprise was "very property-oriented" but there had to be "a sales team out there". Someone in the audience added that Northern Ireland had 14 people working to sell their locations while Scotland only had two.

Nick Higgins, documentary maker and media professor, asked the panel: "Why is it that the SNP lack the imagination when it comes to film?" Philip Schlesinger replied: "The First Minister's intent of changing the nature of broadcasting has crowded out attention from other things."

But wait, don't Scottish producers rely at least as much on broadcasters as they do on cinema? Isn't the creation of a Scottish Broadcasting Service upon independence a great perspective for them, given the lack of attention and resources the BBC devotes to our 'region'? This didn't get discussed much, with the exception of Michael Wilson reminding us that "it is terrible there still is no commissioning base for drama at BBC Scotland." Michael currently works for the American series Outlander which is filmed in Scotland.

Speaking from the audience, Nessa Johnston reminded the panel: "We haven't talked about what difference independence -- or indeed not getting independence -- could make. What do you think is going to happen?" Answers remained vague. "There's going to be a lot of fighting over who controls what," Schlesinger predicted. He also said it wasn't clear what would replace the system of current tax credits and National Lottery funding in an independent Scotland. However, a quick look at Scotland's Future shows that both of these factors are set to remain, in addition to using the country's new overseas network to promote Scotland as production location and further developing the sector over the first term of an independent Scottish parliament.

People seem to forget that under the current constraints of a fixed budget, Scotland can't spend more on one thing without spending less elsewhere. There's only so much money to go around. In the present situation, would higher film funding be acceptable if, in turn, more sacrifices had to be made by schools or hospitals? Isn't it quite obvious that only full fiscal control under independence would enable a Scottish government to access to all revenue streams, make a real difference in spending, and attract inward investment? Little was made of these facts on the panel, though Mairead Hamilton, speaking for Skye-based Young Films (of Inbetweeners fame), acknowledged that the proposed reduction in corporation tax of up to three percent "will be embraced."

Let me do the maths: if Scotland's share of the replacement cost for the Trident nuclear weapons system was to be spent on film instead, that would give Scotland a film fund in excess of £250 million a year -- every single year for the next few decades. Granted, we all know it won't all be spent on film, but you get my point -- not to mention the whole moral argument.

Meanwhile at the debate, more uncertainty was making the rounds. Iain Smith mentioned the 'devo max' option although this has long been ruled out as an option by Unionist politicians. Philip Schlesinger briefly questioned the future of BBC Alba, seemingly overlooking clear provisions for Gaelic broadcasting in the white paper. Belle Doyle asked what happened "if a producer doesn't have a currency to rely on," not understanding that Scotland would be able to use the pound even if the remainder of the UK kept refusing a formal currency union. "Film and TV are going to be low on the list of priorities in an independent Scotland in the first few years," Iain Smith suggested.

The worry that things could be bumpy during a transitional phase seemed to outweigh the bigger picture. An audience member reminded the panelists: "If Scotland were independent, it all becomes about identity and would have a transformational effect."

In other words, can anyone think of a single better marketing effort for Scottish film (or indeed filming in Scotland) than the country putting itself on the world map? "It's not about separation, it's about joining," Iain Smith said. "It can only be done through some kind of move to self-determination. At least Scotland has a brand it can lift up." Iain actually had his coming-out as a Yes supporter already.

"I am very optimistic, despite all the caution, a Scottish tendency," the Glasgow-born producer concluded. "You need to have optimism to be able to make films."