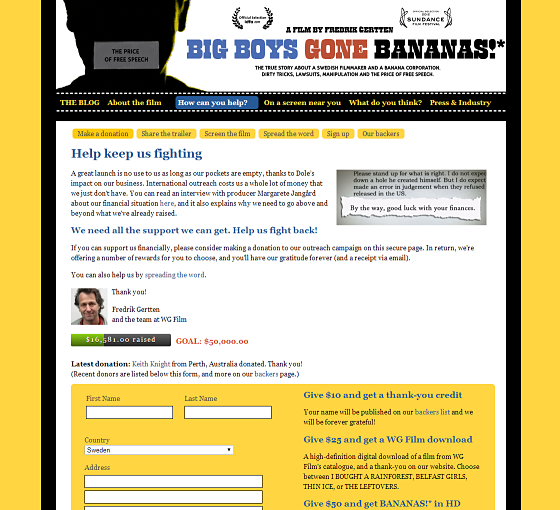 Swedish filmmaker Fredrik Gertten had first made a film called BANANAS!* about plantation workers saying the Dole Food Company had made them infertile. Then the corporation decided to come after the filmmakers, trying to ruin them.

For Fredrik, it was time to make a new film with the fitting title BIG BOYS GONE BANANAS!* – and to build a movement that would support his fight and freedom of speech. As a result of the legal battle with Dole, his production company was also in need of financial support.

Ben equipped Fredrik with a NationBuilder website and set up his successful Kickstarter campaign, one of the first ever in Europe. The target was modest, given no case could be made for the completion of the film (this had already happened) and there was no previous evidence of European interest in this new fundraising concept.

From today's perspective, the Kickstarter target was set too modest, and Ben subsequently turned a NationBuilder donation page into an ongoing crowdfunding page also offering rewards but with a longer-term goal.

To date, this donation page has raised just as much as the original Kickstarter drive, yet without the immense pressure of such a campaign.

In addition, the NationBuilder sidebar was modified to show a 'supporter nav' at all times, not just to logged-in users. Appearing across the site, it directly offers everyone a wide range of actions.

Oh, and there's a happy ending to Fredrik's story. (You'll have to watch the film for that.)