A European Story from Scotland

This morning around 6am, after a sleepless night and with tears in my eyes, I found myself applying to join a political party – something I had never done in my entire life. I would like to share how this came about.

But where do I start? I am a European migrant, originally from Germany; I’ve been involved in all sorts of documentary projects (and personal projects!) in Scotland over the last 20 years, and moved here five years ago with a view to making it my permanent home – it was the much-questioned free movement within the EU that had given me this unprecedented possibility.

Let me be clear that I moved here not for economic reasons but for love – the love of a person as well as love of a place that made me feel grounded and welcome and kept inspiring me. (Oh, and I didn’t take anyone’s job – I was pioneering new strategies to make independent documentaries reach actual audiences.)

Following my time at the Scottish Documentary Institute, I started a small company in Edinburgh a year and a half ago, and more than half of my turnover comes from clients in the EU, outside the UK. The single market makes it very easy for us to provide these services, and all taxes on our income are paid in the UK. That may well be over now.

As of today, I will be forced to consider whether the UK can still provide a good home for our company down the road. Meanwhile, here’s some great news for our European and North American clients: our services to you just became 15% cheaper – simply because the pound lost that much in value in recent weeks and hours… Other than that, this is not a good sign.

Had non-British EU citizens in the UK been allowed to vote in this referendum, those 2 to 3 million people would have swung the entire result. I’m usually not big on memes but I felt compelled to do the maths today: 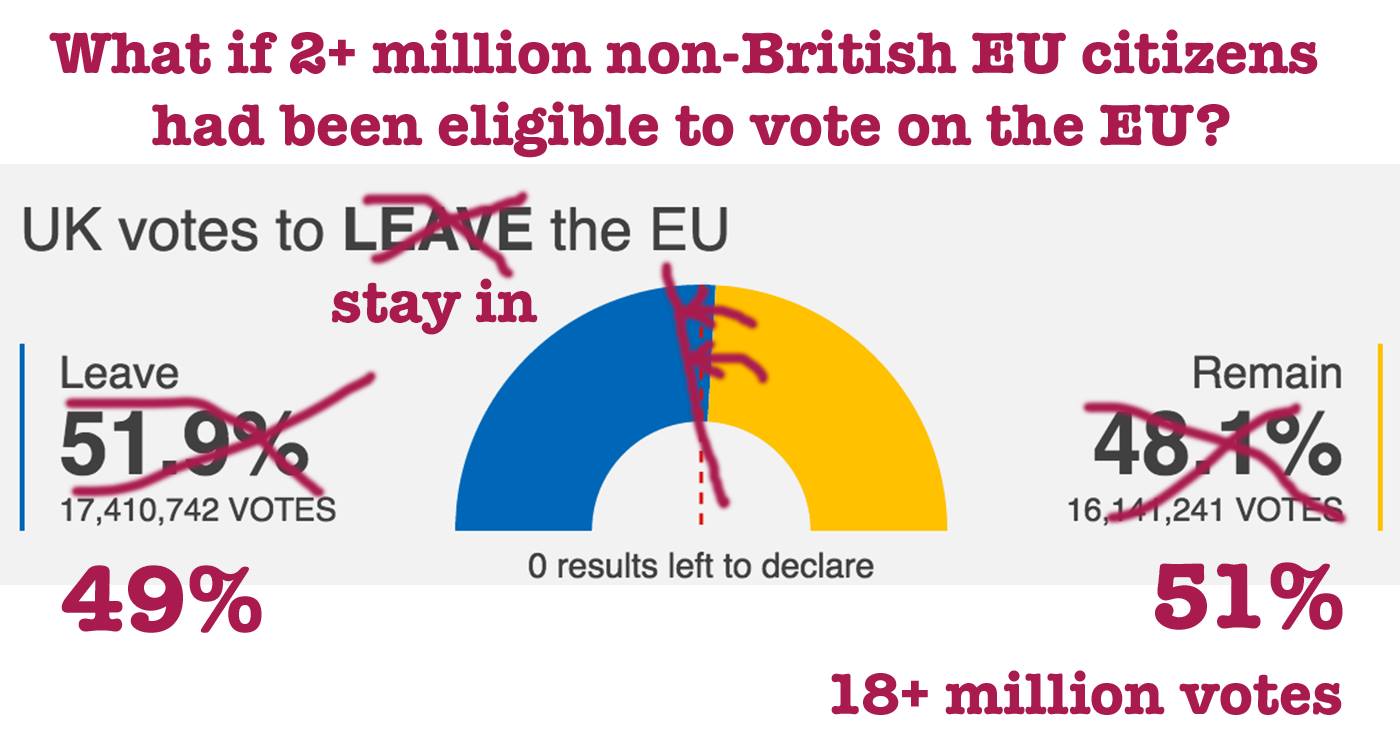 Anyway, we were not allowed to vote… We can vote in Scottish and European Parliament elections, but not on membership in the EU. I tried to raise this issue with organisations in the Remain camp, but it didn’t get much recognition (until someone came up with the #IamanEUmigrant hash tag a few days ago).

So what is this strange Scottish-European sympathy of mine? 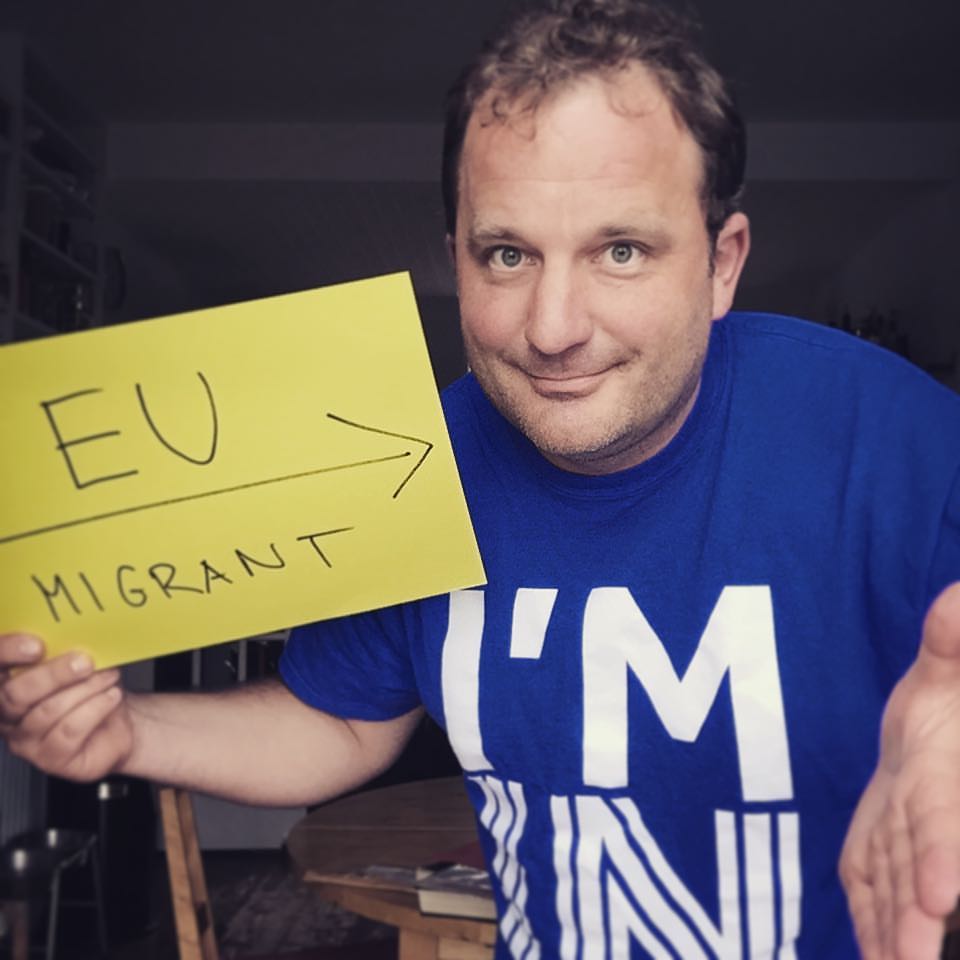 Ever since the late 1990s when I first made a film about the Scottish independence movement, this idea has fascinated me – first and foremost because it is based on a type of national movement that includes and welcomes everyone living in this place, and not on bizarre concepts of ethnic origin that define ‘nationalism’ elsewhere. I was also surprised to see Scotland being so much more pro-European than the rest of Britain – something that really manifested itself in the EU referendum last night.

Just as a reminder for my friends further away, 62% of Scots voted to remain in the EU. Not a single exception among Scotland’s 32 local authorities. What now? 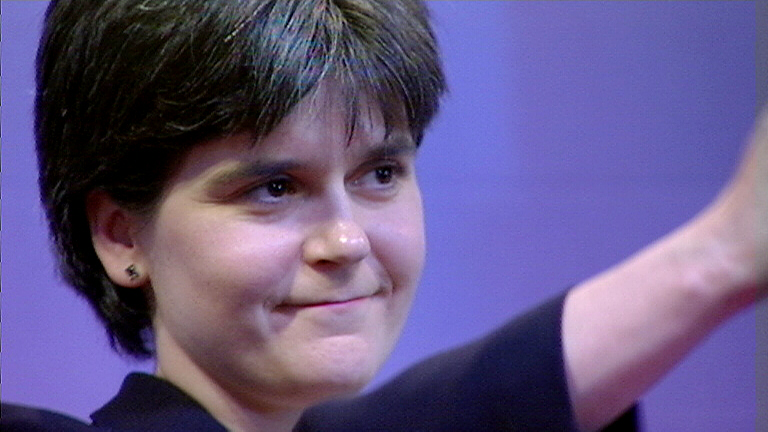 In 1999, I filmed with a talented young SNP candidate called Nicola Sturgeon. Behind her back but on camera, her boyfriend at the time predicted she would become the leader of the Scottish National Party. 15 years later in Shetland, I interviewed Nicola again for a new film project, just weeks before that old prediction came true. Over the years, I’ve listened to many of Nicola’s speeches – but nothing like the stunning statement she gave this morning. As Andrew Wilson put it, a “masterclass from the First Minister. Calm, composed, responsible, and secured maximum leverage on Scotland's behalf for all the discussions to come.”

There we go: as of today, preparations for another Scottish independence referendum are under way. Plenty of folk who voted No in 2014 have already come out for a Yes next time. For Scotland, there's a hint of light and the end of this very dark tunnel. But we do feel devastated just like our friends down south. Many have told me privately they’d vote for independence if they lived in Scotland. Today, one of them proposed we should join up with pro-EU London and form ScotLond. But I digress...

Back in 2014, with rising support for independence in the run-up to the referendum, I started this new project called And Then You Win, following four women giving of themselves for the cause. After a disappointing result and quite distracted by my new business, I put the project on ice. Today, I dusted off those hard drives and memory cards. They smiled at me. First smile I saw all day. Tomorrow, I shall be editing (and I know I said this before, so please do hold me to my word). Last night’s events have just given this story an incredible new dimension.

My Dad helped take down those borders

But let me take a moment to rewind even further. In 1944, my dad was a war refugee, 14 years old, leaving everything behind in Insterburg (near today’s Kaliningrad). By the late 1950s, he was in charge of the German section of the International Student Movement for the United Nations, and determined not to let World War II repeat itself ever again. I remember his pride when he was telling me how the students occupied border crossings to neighbouring countries and symbolically tore down the barriers. They knew the only solution for long-term peace in Europe was for all these former enemies to come together and allow free movement of their people.

He was delighted when the EU finally turned this dream into a reality. I would really like to hear his thoughts on what happened today. Maybe it’s better that I can’t. He is survived by his younger sister Helga who, aged 80, volunteers to teach Syrian refugee children.

Education is key to all this, isn’t it? Today Google in the UK registered a record number of searches for what the EU actually means, does, stands for. Too late for some.

Previously, I always resisted the urge to join one of the Scottish pro-independence parties (even though I shot the official party election broadcast for one of them many years ago). I always thought joining a party would compromise my approach to filmmaking. Today, I hope my application will be accepted. Considering all of the above, it feels like the right thing to do.

Are you interested in following my film project AND THEN YOU WIN? You'll make my day if you sign up here.